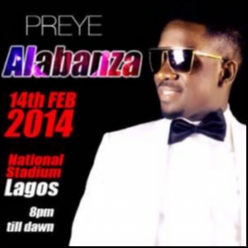 Jibike: Can you please introduce yourself?

Preye: MY name is Preye Odede and I am from Isampou town In Ekeremor LGA all in Bayelsa State. I’m a graduate of Microbiology in from Abia State University Uturu.

Jibike: Let's talk about My Script. How did that name come about and what is the album all about?

Preye: My Script is more or less like words put together in writing to form a book or journal.
In this context, it means “The WORD OF GOD” So, the song Titled My Script is a declaration, countering what the world says about us. We don’t believe what they say but what the WORD says.
The Album is simply an expressing of God's ability to raise anything from nothing to something. It’s about my life's story and how God dealt with every bit of my struggles.

Jibike: How many tracks are there on the album?

Jibike: How long did it take you to put the album together?

Preye: . Well, I actually did singles long before the album was released. I started the process in 2009 though was quite reluctant about an album. I wanted to do more of singles but the demand for an album came pressing and I had to release an album in 2012.
Jibike: So tell us about your hit track. How did it come about?
Preye: Well your Hit track may not be my hit track. hahahaha!! But on a more serious note, I'm sure you are talking about Ebezina.
‘’Ebezina’’ was actually written in 2009 and had little audience till when it started gaining massive airplay in Port Harcourt. It was officially launched in 2012 in the Album ‘’MY SCRIPT’’. The Video was shut in November 2013 and was released in March 2014.

That song tells to a large extent a part of me. I wrote that song in the middle of serious hardship. At a point w

Promote your idea here! Promote your product, website, business, song, or album here!
₦1000 for 7 days • ₦1600 for 14 days • ₦2800 for 1 month.
Email us at contact@ngplaylist.com with inquiries about advertising.

We are starting a page for free beats. If you are a producer and you would like to promote yourself and your creations, you can email us some of your beats that you are willing to give out for free. Please send them to contact@ngplaylist.com. Please make the subject of the email 'Free beat'. In the email, please tell us: 1. Your music name exactly as we should list it. 2. The name of your beat/track(s) 3. Your phone number and/or email. 4. What City/State you are in. Please only send in beats that you are donating completely for any artists to use freely and commercially.
Home Classifieds Forum Top 100 Songs Photos My Likes Charts Upload a Song Tips for Musicians Sign Up Sign In Newest 100 members Newest 100 songs
▼ Songs you just played
God Of Possibility, Producer V.Tunes 4:22 • 5.0 MB
Evans Gordons   Evans Gordon's Ogar
0
28
2
Oba Ayeraye 5:05 • 5.2 MB
Ykdavids   Bisi Kunle
0
1
0
My Father's Love ft. Beejay sax 6:17 • 6.3 MB
Kay Wonder   Bisi Kunle
0
1
0
I'ma Abasi 4:37 • 4.8 MB
Man Of Praize   Bisi Kunle
1
4
0

Suggestions/Requests
How can we improve? Tell us about your experience here on NGplaylist, so we can make you happier! You can also email us directly at contact@ngplaylist.com

Artists, Record Labels create your own profile on NGplaylist, and promote your artists here!

DMCA: We respect your copyrights. If you're an artist or record label, and you don't want your song downloadable, or even taken off completely from NGplaylist, please let us know! Email us: contact@ngplaylist.com